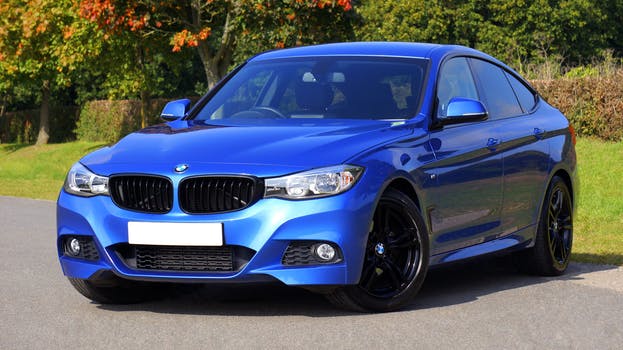 This article is all about using marketing techniques to get greater take up of your learning resources. If you haven’t read part 1, click here.

The story so far…the Sky L&D Agile team have learned the marketing basics, segmented their business and conducted interviews with their users.  Now it’s time to put it all together into profiles, messaging and a marketing plan.

Now that we were getting to grips with the behaviours and psychology of the super users, we were able to craft a target user profile. 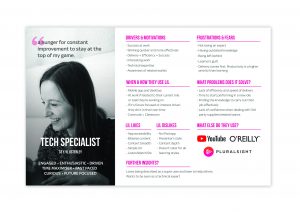 The outline of the target user highlights what they like, what they don’t, and what motivates and influences them.  It’s not one person in particular – more a persona created to keep in mind when developing materials.

Driven, time poor, always looking for an edge to stay ahead in a changing environment, Linked In Learning was their competitive advantage to understand new technologies and approaches.  They often used it in their own time, on their commute, even queueing for their lunch, using it frequently, particularly when tackling new projects and roles.

One of the key aspects of a target user profile is what drives them.  Technical expertise was a deep part of their identity.   Knowing their area inside out contributed to their success, and they needed to be up to date on what was coming next.  So Linked In Learning  helped them do their job better, and feel better because it reinforced a positive aspect of their identity.

Where does the product fit in this?  In the  summarised proposition statement. The team articulated the  link between the user and the product like this:

This highlights the users, their deep motivations and needs and how the product helps deliver these needs.   It’s in their language and builds directly from the target user picture.

Previous messages from the L&D department had been broad brush and “very HR-y,” as one of the team put it.  The insight from the interviews led to a new line.  Sky employees in tech, it turns out, want to “Stay on top of their game” and “Get ahead in their career”.  This was the basis for creative executions that tapped into this psychology.

As an outsider, these lines had a particular resonance for me with the culture in Sky. Looked at in isolation, they could be seen as generic – surely most developmentally minded employees want to stay on top of their game?  In Sky, however, with the strong sense of urgency and delivery, these lines reflected a real need more than an aspiration.  If they didn’t stay at the top of their game, they wouldn’t thrive or maybe even survive.  It wasn’t a nice to do, more a must do.

One last piece was validating the message with non-users and light users.  Small groups of both were interviewed to see if this message made sense and resonated with them.  It did.   Onto the creative work.

To achieve the best response to the marketing campaign, two different routes were developed and  tested on a variety of platforms.

The learner was the hero in one route – finding the time to learn either at their desk or in a café. 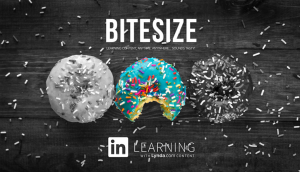 The ‘Bitesize’ route was highlighting a product feature of LinkedIn Learning – small chunks you can consume anywhere.

Deploying the campaign – getting the message out there

Through organisational knowledge and interviews, we had found out the following platforms would have the most impact on our target.

Leading by example:  getting visible leaders to shout about it in a genuine way worked.

Leverage the super-users:  provide a platform for them to share their story and how they use it.  Provide testimonials in emails and on internal forums.

Roadshows:  when people heard how easy it was to use from somebody credible, they were keen to try it out (‘I listen to it on 1.25 speed to get through more in less time’).

Specific recommendations:  suggest courses that are relevant – ‘People like you are learning this right now’.

These options were tested over a period of one month in the two selected directorates.

Compared to directorates where there was no marketing interventions, the test unit grew 17 percentage points more – from 33% usage of LinkedIn Learning to 50%.  So on a headline basis, it worked.  As ever, isolating which media points had greatest impact is difficult to establish – so that’s a job for a future sprint.

The real result for me, however, the  level of competence the team reached in such a short space of time. Channel 4 used to have a show many years ago called Faking it, where regular people had to become ‘experts’ in a field like photography or being a stunt man in a  matter of weeks.  This reminded me of it – and the team would have definitely passed the final test.

So that’s the real plus of Agile for me – building capability in teams quickly around a task and delivering outputs that normally take months. I’m hooked.

Tracey Waters, Head of Learning and Development at Sky.